You are using an outdated browser. Please upgrade your browser to improve your experience.
by Bryan M. Wolfe
September 6, 2011
Four years ago today, Steve Jobs announced the first generation iPod touch at its “The Beat Goes On” event.  At the time, the iDevice was revolutionary, being the first Apple iOS device that didn’t require a contract. It also came with Wi-Fi, which at the time was a very big deal. Launched September 5, 2007, the iPod touch (yes the “t” was and is lower-case) was the first iPod with Wi-Fi and a Multi-Touch interface. Plus, it came without a speaker and was 8mm in thickness. The first model was available in 8GB and 16GB. A 32GB model was released in February 2008. Surprisingly, users would need to pay an upgrade fee to move from iOS 1.1 to iOS 2.0 in 2008. Of course, by that time, the second-generation iPod touch was close to market. New iPod touch versions were announced in 2009 and 2010. Today, we’re not even sure a fifth-generation iPod touch is to be released. Nonetheless, Happy Birthday! 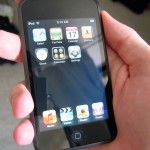 The iPod touch Turns Four Years Old Today
Nothing found :(
Try something else