You are using an outdated browser. Please upgrade your browser to improve your experience.
by Bryan M. Wolfe
September 29, 2011
When Apple finally unveils its next-generation iPhone, it might support HSPA+, which is sometimes referred to as “4G” technology. This rumor is solely based on a screenshot of a presentation made by a China Unicom executive at this week’s Macworld Asia event, then first reported by Macotakara. So, what does this mean? That depends. According to the report:

Keep in mind, in the United States, HSPA+ isn’t LTE 4G, which is slowly being rolled out by carriers, including AT&T and Verizon. In fact, according to MacRumors, HSPA+ is better defined as “3.5G.” As such, if this story is correct, it would only benefit U.S. customers using AT&T, since Verizon doesn’t have a similar service. They state:

AT&T has rolled out the intermediary HSPA+ technology as a bridge to LTE, and has been calling HSPA+ "4G" in its marketing -- though many believe "3.5G" is a more accurate description. So, existing AT&T iPhone 4 owners upgrading should be able to see a speed boost if they live in a supported area. In comparison, Verizon's data speeds max out a theoretical maximum of 3.1 Mbps. Meanwhile, true 4G (LTE) support for both Verizon and AT&T is not expected until the 2012 iPhone model at the earliest.

Any bump in connection speed on the next iPhone would be nice. Of course, unless your carrier is actually offering the service and doing so where you live, this news, if true, could mean nothing for most users. As a reminder, Apple will announce the next-generation iPhone on Tuesday from Cupertino, California. We’ll keep you updated. 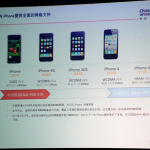 The Next Phone To Support HSPA+ ‘4G’ Technology?

The Next Phone To Support HSPA+ ‘4G’ Technology?
Nothing found :(
Try something else