You are using an outdated browser. Please upgrade your browser to improve your experience.
by Christine Chan
September 8, 2011

Turntable.fm has been the hot thing the past few months, allowing users to share music with others in rooms. The service obtained over 140,000 users during the first month, and growing. So it was inevitable that Turntable.fm would be going mobile, according to this tweet.

MG Siegler of TechCrunch has managed to get some upcoming details on the iPhone app that is coming, as well as screenshots.

The Turntable.fm app is due sometime next week, at least that’s the plan. The app has already been in the beta testing phase with a few dozen users during the past few weeks. According to these beta testers, the app works great over WiFi connections, but not as well when over 3G.

The screenshots that were provided to TechCrunch show a very polished app, which was actually built by one teenage iOS developer.

If you have used the Turntable.fm service, you’ll be pleased to know that the actual look and feel of the service has been ported over very well. As the beta testers say, “it is awesome.”

Just like the desktop version, the app requires Facebook integration, so you’ll still need that to be able to use it. But that’s pretty ubiquitous nowadays, isn’t it?

There is currently no word on an Android version.

Siegler also reports of rumors that Turntable.fm may be a part of Facebook’s upcoming music announcement at f8, which will be taking place a few weeks from now.

This is all very exciting news for music fans and Turntable.fm users alike. We can’t wait to get our hands on this app very soon and aim to have a full review when it is released. 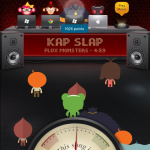 Turntable.fm Is About To Rock Your iPhone With An Upcoming App

Turntable.fm Is About To Rock Your iPhone With An Upcoming App
Nothing found :(
Try something else