You are using an outdated browser. Please upgrade your browser to improve your experience.
by Mike Lata
September 28, 2011
If you are a PC or Mac gamer, you may have heard of the underwater exploration game called Aquaria. This is a very deep game with an awesome soundtrack and gorgeous underwater environments to navigate. It also has a bit of magic and mysticism as part of its charm. According to TouchArcade, the game will be available for the iPad and iPad 2 sometime this fall. The iPad port is an enhanced version of the original with various tweaks like the ability to see explored areas via a navigation map. This upcoming version has also been designed with touch controls in mind from the get-go in a way that may make it more intuitive and enjoyable than previous versions. You will be able to guide the player controlled, mermaid-like girl with a flick of your finger. A video was released showing some gameplay on the iPad as well as some history of the game from one of the co-creators of the original hit, Alec Holowka. For the upcoming iPad release, he teamed up with Andrew Church, who ported a version to the PSP (via homebrew). You can view the video of the game running on an iPad and being showcased by Holowka here: Aquaria for iPad Teaser Trailer from Kert Gartner on Vimeo. 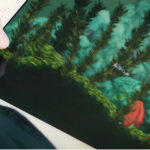 Underwater Exploration Game, Aquaria, Will Hit The iPad Soon
Nothing found :(
Try something else