You are using an outdated browser. Please upgrade your browser to improve your experience.
by Bryan M. Wolfe
October 20, 2011
Dates for Apple's wildly popular Tech Talks have been announced for this year. The iOS 5 Tech Talk World Tour 2011 schedule will be held across Europe, Asia and America beginning next month through January, according to a posting on the company's website. First launched in 2008 and again repeated in 2009 as “iPhone Tech Talk World Tours,” these events, held throughout the world, are much like mini-WWDC sessions for developers. However, unlike the $1,599 per-person WWDC, the World Tours were free to attend. Stops on the 2011 schedule include: Berlin, London, Rome, Beijing, Seoul, Sao Paolo, New York City, Seattle, and Austin, Texas. You can register today by visiting the iOS 5 Tech Talk World Tour 2011 website. 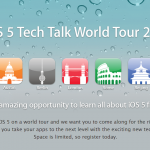 Apple Announces 2011 Tech Talk Dates
Nothing found :(
Try something else