You are using an outdated browser. Please upgrade your browser to improve your experience.
by Bryan M. Wolfe
October 26, 2011
Apple this week received a second patent for its “slide to unlock” feature used with the iPhone/iPod touch and iPad. This means other device manufacturers cannot use this technology within their own products, in news first reported by Patently Apple. They state:

If a user doesn't use a security code for their iOS device, then this is the screen graphic that they'll be greeted with. The user simply slides the arrow to the extreme right side to unlock the screen and be presented with their home screen. Those choosing to lock their screen with a security code will be greeted with an alternative screen graphic that displays a numeric pad to enter a security password, which isn't covered in this patent. 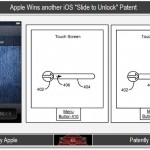 Apple Patents Slide To Unlock So Nobody Else Can Use It

Apple Patents Slide To Unlock So Nobody Else Can Use It
Nothing found :(
Try something else