You are using an outdated browser. Please upgrade your browser to improve your experience.
by Lory Gil
October 28, 2011

Aces Hearts ($0.99) by Concrete Software, Inc. allows you to play the popular trick-taking card game Hearts against three non-player characters (NPC). Be sure to pick up this game before your next visit to the grandparents’ house so you can hone your skills at “shooting the moon” and finally mop the floor with grandma. 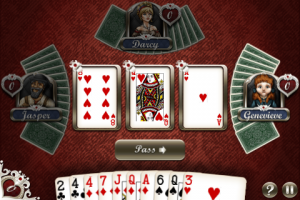 If you’ve never played a game of Hearts, you are probably in the majority these days. My grandmother taught me when I was a preteen. Because it didn’t involve anything regarding Ralph Macchio or Cyndi Lauper, I found it boring and didn’t play again for over a decade. I’m still not particularly good at the game, but it is fun to play while camping.

In this app, you play against three other NPCs, each looking like they stepped out of a Lemony Snicket novel. Characters include Vladimir, Drucilla and Jasper, as well as seven other interesting players. You play the game on a red velvet table with a classic looking deck. The cards are animated and will shuffle to each person automatically.

There are five different levels of difficulty. For those who don’t know how to play the game, there is a simple tutorial to get you started. Play with or without the Jack of diamonds bonus card, which allows its bearer to subtract 10 points from his or her total score. Shooting the moon, is a scoring technique where a player attempts to capture all penalty cards in order to deflect the points onto other players, it is difficult, but possible. The maximum table score can be changed for shorter or longer gameplay. There is an in-game advisor to help with which cards you are allowed to play next.

Overall, this universal app is a great way to play a game of Hearts. If you’ve never played before, pick up this game and learn the rules as you go. Before long, you’ll impress Great Aunt Petunia with your card playing prowess. Pick it up in the App Store for $0.99. 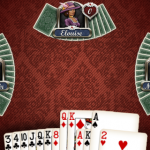 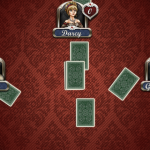 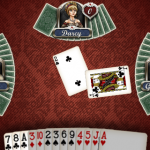 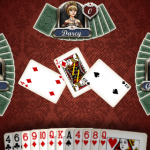 Astonish Your Grandparents With Your Knowledge Of The Game Of Hearts

Astonish Your Grandparents With Your Knowledge Of The Game Of Hearts
Nothing found :(
Try something else