You are using an outdated browser. Please upgrade your browser to improve your experience.
by Bryan M. Wolfe
October 20, 2011
AT&T announced today that it has activated more than one million iPhone 4S’ as of Tuesday, calling its their most successful iPhone launch in history. First available last Friday, the iPhone 4S is Apple’s fifth handset launched, after the first arrived in 2007 exclusively through AT&T. On October 17, Apple announced that four million iPhone 4S’ were sold in the first three days of its release. According to Ralph de la Vega, President and CEO, AT&T Mobility & Consumer Markets:

“It’s no surprise that customers are clamoring for iPhone 4S and they want it to run on a network that lets them download twice as fast as competitors.”

While the iPhone 4S doesn’t actually boast a 4G antenna, that hasn’t stopped AT&T from using that moniker when describing its HSPA+ technology, which isn’t available for Sprint or Verizon customers via the iPhone 4S. HSPA+, in areas where it is available, increases speeds up to 14.4Mbps. 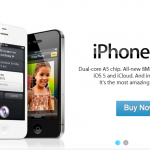 AT&T: One Million iPhone 4S Activations Through Tuesday
Nothing found :(
Try something else