You are using an outdated browser. Please upgrade your browser to improve your experience.
by Alexander Vaughn
October 12, 2011
Today marks the launch of what many believe is one of the biggest iOS update yet: iOS 5. With it, Apple is bringing over 200 new user-facing features, that will without a doubt supercharge your iDevice. To sell you on the update, and help you discover what's new, we've listed and detailed the top new features. Check it out:

In iOS 5, your Push Notifications will no longer appear as a big annoying blue box in the midlde of your screen. Rather, a smooth little bar will spin at the top of your screen, and dragging it down will allow you to access all the notifications you received. Then, tapping them will send you to the appropriate app. You can access the Notification Center from any screen, by swiping down from the top of your iPhone. There, you'll also find your emails, weather and stock information. Not to mention, it appears on your lock screen, from which you can also launch the apps you want directly with a swipe.

Without a doubt one of the biggest new features of iOS 5 is the cloud services it comes with, called iCloud. iCloud brings a lot of new features, from free redownloads of purchased content, a free email address, 5GB of cloud storage, free syncing for all your contacts, calendars and just so much more. Stay tuned on AppAdvice.com for a full roundup of what iCloud has to offer.

Another major new feature of iOS 5, which also ties-in with iCloud, is that it no longer needs your computer to really function. That is, it can sync with iTunes over Wi-Fi for starters, but it doesn't even really need it anymore. You can initialize the iPhone without iTunes, back it up to iCloud, and restore your data, apps and settings without it. It will even sync your photos over the air, a feature called Photostream.

In iOS 5, your iPhone can automatically detect when you're texting or MMS'ing another iOS 5 user, and will save you money by sending your message or pictures using the internet, rather than your carrier. What's great about it is that it's completely automated and seemless, and will fallback to SMS when you or your interlocutor don't have a connection. To know if you're using texts or iMessage watch for the send button's color. If it's green (like money), you'll have to pay for it. If it's blue, it will use iMessage and won't cost you a cent.

Newsstand is the new cool way to get your newspapers and magazines delivered on the iPad. Newsstand enabled apps (which you can find on the App Store, and in the Newsstand Store), can not only display their cover, but they will automatically download new issues in the background without you knowing. This way, next time you pick it up, the latest edition will be waiting for you already.

Apple has also done some cool things with the camera in iOS 5. Not only it's faster, but it allows you to take pictures using the top volume button. You can launch the camera app right from the home screen by double-pressing the home button, and then edit your images on the go in the photos app.

Forget the Notes app for your lists. Reminders is the To-Do app of the future. It allows you to put together both To-do lists, and reminders for a set date and time. It includes many fancy features such as "Geo-fencing", which means you can set it up to remind you about things when you reach a defined location.

Safari has gotten radically faster in iOS 5. That's a big change on its own. Then, it now allows you to more easily read online content with a "reader" button, that strips out the ads and makes the text look nice. Also, you can save text easily for later through a feature called "Reading list", which you'll find in your bookmarks. Not to mention, the iPad version of Safari now features great looking tabs.

In iOS 5, you only need to sign into Twitter once. It happens in the settings app. Then every enabled app will be able to plug into Twitter with just your authorization, and will no longer need your credentials.

The ability to swipe through your active apps using four and five finger-swipes is revolutionary on the iPad. On top of letting you switch between apps by swiping left and right, swiping up brings the multitasking bar and a four-finger pinch-in will send you to the home screen. So that's it, here are the main features you should know about and first try out in iOS5. It's available now. Also, if you want more details into what's new in iOS 5, we have the full list of every single change right here. [Image Credit: Apple] 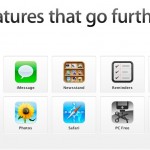 Here Are The Top 10 New iOS 5 Features You Should Know About
Nothing found :(
Try something else