You are using an outdated browser. Please upgrade your browser to improve your experience.
by Bryan M. Wolfe
October 14, 2011

Last year, Apple’s PR machine went into overdrive when it had to deal with the iPhone 4 “death grip,” later known as “Antennagate." Today, we’re happy to report this issue has apparently been resolved for good, at least on the iPhone 4S.

According to Italy’s iSpazio, Apple’s newest handset (armed with a dual antenna) eliminates the lost signal strength many experienced with the iPhone 4. As many will recall, when the iPhone 4 launched in June 2010, many customers reported lost signal strength when placing their left hand on the bottom of the iDevice while making a call. Eventually, the situation, then known as “Antennagate,” forced Apple to admit there was a problem. Eventually, the company confirmed that using a simple case over the iPhone 4 eliminated the issue. To prove the point (and put the issue behind them), Apple temporarily offered free cases to customers. Then, going forward, the company recommended cases for anyone owning an iPhone 4. With the iPhone 4S, Apple changed to a dual antenna design. As this video proves, the “death grip” is no longer there – with our without a case. Take a look: Therefore, we figure this news means you don’t have to buy a case for your iPhone 4S, although we are sure that many will. Regardless, its nice to finally see the "death grip" gone. See also: Every iPhone 4S Deserves A Cool Case - Here Are Eight To Choose From Every iPhone 4S Deserves A Cool Case - Here Are Six (More) To Choose From 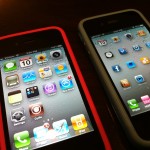 It’s True, The iPhone 4S Eliminates The Death Grip
Nothing found :(
Try something else