You are using an outdated browser. Please upgrade your browser to improve your experience.
by Alexander Vaughn
October 12, 2011
Update: Ars Technica talked to Sprint and was told the opposite. We don't know who's got it right for now, we'll let you know. The days when CDMA iPhone users were at a disadvantage when traveling internationally are long behind us. As just discovered by Macworld, the iPhone 4S is even more of a worldphone than we originally thought. According to them, not only can your Sprint or Verizon CDMA iPhone be used internationally on GSM networks, but the SIM slot that it comes with is actually unlocked, meaning you can pop in any SIM you want. That's right, when you're traveling to other GSM countries, you'll be able to buy a local micro-SIM card (or a normal one and cut it), and pop it into your iPhone 4S. While Sprint will be making this a standard, Verizon will still be locking the iPhone 4S SIM slot for new users, and will only grant what they call "international unlock" for folks who've been good and around for at least 60 days. The big unknown, of course, is whether you could actually pop an AT&T micro-SIM into such a device. We've tried to find out, but haven't been able to figure that out yet. If it's the case, that would be a very interesting feature. After all, since you're paying for the contract, why should the carrier prevent you from doing what you want with the phone, right? But that's a whole other debate. (image Credit: Slashgear) 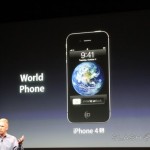 Surprise: Sprint And Verizon iPhone 4S Comes With An Unlocked SIM Slot
Nothing found :(
Try something else