You are using an outdated browser. Please upgrade your browser to improve your experience.
by Bryan M. Wolfe
October 15, 2011
Prior iPhones allowed users to turn 3G on or off to save battery life. With the iPhone 4S, however, this option is no longer available. This discovery comes courtesy of one of our readers, Nathan. On the iPhone 3GS and iPhone 4, users are able to go Settings > General > Network and turn 3G on/off.  Turning 3G on, according to Apple’s own admission “loads data faster, but may decrease battery life,” which, naturally is true. However, the 3G option isn’t available following the same path on an iPhone 4S. As Nathan explains:

The option to only use a 2G signal has been removed from the OS so there's no way to save that battery life. Really not happy at all about that. I hope this benefits someone. If I had known I honestly wouldn't have brought the phone.

Keep in mind, this exclusion doesn’t mean iPhone 4S users in a 2G (Edge) only area cannot connect, because they can. Rather, now you don’t have the option to downgrade when 3G is available. We aren’t sure why Apple removed this option for the iPhone 4S, but kept it for earlier iDevices. After all, the option remains on the iPhone 3GS and iPhone 4 even with iOS 5 installed. We thank Nathan for this tip. Updated: As some of our readers later told us, this feature was NEVER available on Verizon iPhones. 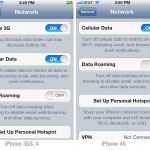 The iPhone 4S: 3G Or Else
Nothing found :(
Try something else