You are using an outdated browser. Please upgrade your browser to improve your experience.
by Bryan M. Wolfe
October 4, 2011
As expected, Apple today unveiled its next-generation iPhone, calling it the iPhone 4S. Apple made the announcement moments ago at today’s iPhone event in Cupertino, California. The iPhone 4S replaces the iPhone 4, which first went into production in June 2010. This will be the first "World iPhone," in that it will work on any network. The handset will come in three flavors. These include: 16GB for $199, 32GB for $299, and 64GB for $399. Both black and white models will be available. In addition, the iPhone 4 will remain (8GB, $99), as will the iPhone 3GS (8GB, free with contract). In the U.S. it will be available through AT&T, Verizon, and for the first time, Sprint. The iPhone 4S arrives October 14 in the U.S., Canada, Australia, the UK, France, Germany, and Japan. Preorders begin October 7. Looking just like the existing model, the new iPhone 4S smartphone includes an A5 chip and an 8-magapixel camera with backside illumination. The new camera inside iPhone 4S has a 8-megapixel sensor, 3264 x 2448 to print out an 8 x 10 glossy, and 60% more pixels than in the iPhone 4 sensor. The new sensor, though permits 73% more light, yielding much richer colors. It's also about 33% faster. There''s a hybrid IR filler, allowing for better color accuracy and universal color. There are also five element lenses, 30% more sharpness and f/2.4 aperture. Inside the A5 chip is an Apple signal processor for things like face detection, which can tell if up to 10 people are in a photo. It adds better white balance, too. Video is 1080p HD. In addition, you can also use the iPhone 4S on a television using an Apple TV. So, yes the next iPhone is NOT the iPhone 5. Thoughts about today's address? Let us know by using the comments below. 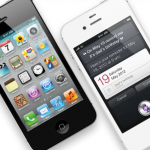 The iPhone 4S "World Phone" Is Revealed
Nothing found :(
Try something else