You are using an outdated browser. Please upgrade your browser to improve your experience.
by A.T. Faust III
October 21, 2011
Walter Isaacson's Steve Jobs is just a final weekend away from it's highly-anticipated release, with early excerpts already turning up among the internet's tech and business blogs. One of the more complete previews, sourced from an Associated Press advance copy, pegs the bestseller-to-be as a fittingly acerbic, no-holds-barred exposé. According to the AP report (via Yahoo! Finance), the biography

portrays Steve Jobs as a skeptic all his life -- giving up religion because he was troubled by starving children, calling executives who took over Apple "corrupt" and delaying cancer surgery in favor of cleansings and herbal medicine.

However, though the book chronicles much of Jobs' philosophical outlook and managerial development, there's plenty of behind-the-scenes, industrial drama to feed the modern mobile consumer's interest and curiosity. And, naturally, that means Android's in the equation. The AP report continues:

The book also provides insight into the unraveling of Jobs' relationship with Eric Schmidt, the former CEO of Google... Isaacson wrote that Jobs was livid in January 2010 when HTC introduced an Android phone that boasted many of the popular features of the iPhone. Apple sued, and Jobs told Isaacson in an expletive-laced rant that Google's actions amounted to "grand theft." "I will spend my last dying breath if I need to, and I will spend every penny of Apple's $40 billion in the bank, to right this wrong," Jobs said. "I'm going to destroy Android, because it's a stolen product. I'm willing to go thermonuclear war on this." ...In a subsequent meeting with Schmidt at a Palo Alto, Calif., cafe, Jobs told Schmidt that he wasn't interested in settling the lawsuit, the book says. "I don't want your money. If you offer me $5 billion, I won't want it. I've got plenty of money. I want you to stop using our ideas in Android, that's all I want."

Of course, Jobs wasn't all piss and vinegar. Cutthroat as he reputably was, the man appreciated honest competition and innovative purity whenever and wherever he saw it. On Hewlett-Packard's TouchPad disaster and summary shake-up, for example, Jobs felt no victory. He was, more than anything, genuinely disheartened.

"Hewlett and Packard built a great company, and they thought they had left it in good hands," Jobs said. "But now it's being dismembered and destroyed... I hope I've left a stronger legacy so that will never happen at Apple."

To that end, Jobs discusses his successors and the team he built to keep building in his wake. The AP explains how

[h]e called Jonathan Ive, Apple's design chief, his "spiritual partner" at Apple. He told Isaacson that Ive had "more operation power" at Apple than anyone besides Jobs himself -- that there's no one at the company who can tell Ive what to do. That, says Jobs, is "the way I set it up."

Clearly, biographer Isaacson's privileged access and resulting work (rushed though it may have necessarily been) offers gadget fans, Apple devotees, and history buffs a must-read, enlightening, uplifting experience. And, while the above initial snippets are effectively cherry-picked for audience appeal, they nevertheless serve to showcase Apple's late CEO in all his passion, all his fury, and all his glory. And, even though most folks don't need a book to help them see all that, we're going to read it anyways. President Obama probably should, too. Steve Jobs by Walter Isaacson is available on Monday, October 24, from Simon & Schuster ($35), but you can pre-order the iBooks edition today for just $16.99. 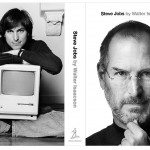 Walter Isaacson's "Steve Jobs" A Picture Of Passionate Genius
Nothing found :(
Try something else