You are using an outdated browser. Please upgrade your browser to improve your experience.
by Bryan M. Wolfe
October 13, 2011
Even though Newsstand looks a lot like an app, in reality it is a separate folder within iOS 5. As such, Apple won’t let you put Newsstand into another  folder. However, thanks to a tip from The Coding Massacre, this is now possible. While we don’t see a need to put Newsstand into a separate folder on the iPad, on the iPhone/iPod touch it is a different story. This opinion mainly stems from an assumption that most iPhone owners don’t actually read magazines on their iDevices. Since you can’t actually delete Newsstand from iOS 5, placing it into a folder with other seldom used apps is a worthy alternative. Regardless, this solution works on both the iPhone and iPad. First, take two apps and create a folder. Second, as soon as the apps are in the folder, drag Newsstand into the folder too. As long as you’re quick enough, Newsstand will go into the folder! Note: If you open Newsstand while it’s in a folder your springboard will crash. If you want to use Newsstand at some point just take it out of the folder and you’re good to go! We, like The Coding Massacre thank @AnataTenshi for discovering this solution. 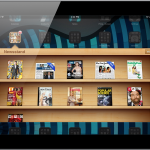 Here Is How To Put Newsstand In A Folder

Here Is How To Put Newsstand In A Folder
Nothing found :(
Try something else