You are using an outdated browser. Please upgrade your browser to improve your experience.
by Bryan M. Wolfe
October 25, 2011
The Steve Jobs biography has uncovered quite a lot about the late Apple co-founder and how he went about creating products. One of those, the iPad, was mentioned quite a bit, as Mac Rumors was one of the first to recognize. Among the findings is how Jobs and Apple’s Jonathan Ive spent a great deal of time together testing a number of iPad prototypes each based on size.

The process began with Jobs and Ive figuring out the right screen size. They had twenty models -- all rounded rectangles, of course -- in slightly varying sizes and aspect ratios. Ive laid them out on a table in the design studio, and in the afternoon they would lift the velvet cloth hiding them and play with them. That's how we nailed what the screen size was," Ive said.

The first – and current - iPad has a 9.7” screen. However a smaller 7" model, the so-called “iPad Mini” has long-been rumored. Mac Rumors contends that one of those twenty models mentioned was almost certainly this model, which it calls Apple’s “runner-up choice that made it to late prototypes.” In addition, the biography confirms that Jobs was extremely upset with the initial press reaction to the iPad. Biographer Walter Isaacson went so far as to say Jobs felt “annoyed and depressed” on the evening of the iDevice’s launch. Of course, the iPad turned out to be a success, which likely provided Jobs with much comfort despite those initial reviews. It will be interesting to see whether the “iPad Mini” will eventually see the light of day. After all, Amazon’s upcoming Kindle Fire is 7”, as are other tablets. Surely we’ll find out at some point, especially with Apple poised to release the iPad 3 in early 2012. 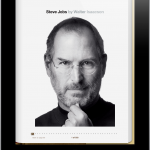 Whatever Happened To The 7 Inch iPad?

Whatever Happened To The 7 Inch iPad?
Nothing found :(
Try something else