You are using an outdated browser. Please upgrade your browser to improve your experience.
by Bryan M. Wolfe
October 4, 2011
Besides the long-rumored but missing iPhone 5, something else was noticeably absent from today’s “Let’s talk iPhone” event.  Despite rumors to the contrary, the Facebook for iPad app wasn’t announced today in Cupertino, California or anywhere else. According to TechCrunch, this is because Apple disinvited Facebook representatives at the last minute. According to the report:

We’ve heard from a source that sometime late last night, Facebook was told that they would not be a part of Apple’s event today. This is nothing new. Companies are told to prepare to go on stage at these events all the time only to get pulled at the last second. It’s just a bit odd that a company as large as Facebook was passed over.

Passed over? Doesn’t that seem like the biggest understatement of the year? While Apple did have time to announce a Cards app that looks like it belongs in 1998, the tech giant could't welcome the biggest social network on the planet to the party? Yeah, something doesn’t seem quite right. What happened to all of the love? On this, TechCrunch concludes with:

Just because something is not shown on stage at an Apple event doesn’t mean it’s not coming. It just means that it didn’t make the cut for one reason or another. Stay tuned.

We'll do just that - wait that is. What do you think? Why was Facebook not at today's event? Let us know your thoughts by using the comments below. 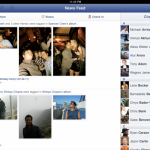 Why Facebook Wasn’t On The Stage Today
Nothing found :(
Try something else