You are using an outdated browser. Please upgrade your browser to improve your experience.
by Bryan M. Wolfe
November 3, 2011
Twelve days before its Kindle Fire tablet arrives, Amazon has announced a new service that makes buying a Kindle device even more valuable. The Kindle Owners’ Lending Library is available now via the Amazon website. Beginning today, Kindle customers can choose from thousands of books to borrow for free including over 100 current and former New York Times Bestsellers. To do so, customers need to own a Kindle (any Kindle, in fact) and an Amazon Prime membership ($79/year). According to Russ Grandinetti, Vice President, Kindle Content:

"The Kindle Owners' Lending Library is a great new benefit for Kindle owners and an entirely new growth opportunity for authors and publishers. With the growth in Prime membership and the recent addition of Prime Instant Video, we've been able to broaden our relationships with movie and TV studios such as CBS, Fox, and NBCUniversal and significantly increase their revenue. We're excited to expand that investment to books - with this launch, we expect three immediate results: Kindle owners will read even more, publisher revenues will grow, and authors will see larger royalty checks."

This news follows the introduction earlier this year of the company’s Prime Instant Videos Plan. Using this service, Prime customers have unlimited (and free) instant streaming of over 10,000 movies and TV shows. Of course, neither Prime offering works on Apple iDevices, which almost certainly is deliberate. The first is only available on the Kindle Fire tablet and select HDTVs, set-top boxes, Blu-ray players, and DVRs. You can also stream the videos via Macs and PCs. Meanwhile, the Lending Library is only usable on a Kindle device, and not through the company’s popular Kindle iOS app. When Amazon Founder and CEO Jeff Bezos announced the $199 Kindle Fire in September, he emphasized its deep integration of content. Today’s announcement shows that Amazon is committed in providing much more of this content for “free” than first realized – first with movies and TV shows and now with popular books. It will be interesting to see if Apple will eventually offer similar plans via iTunes and iBooks. Most likely, Apple’s decision will be heavily influenced by just how popular Amazon’s programs become. As a reminder, the Kindle Fire arrives on November 15. 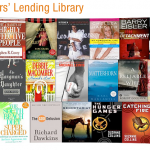 Amazon Ups The Ante In Tablet Wars By Offering More Freebies
Nothing found :(
Try something else