You are using an outdated browser. Please upgrade your browser to improve your experience.
by Bryan M. Wolfe
November 29, 2011
Apple, moments ago, released iOS 5.1 beta to registered members of the iOS developer program.. The release, which is available now through Apple’s iOS Dev Center, is for the iPhone 4S, iPhone 4, iPhone 3GS, iPad 2, iPad, and third and fourth-generation iPod touch devices. While the release notes don't list anything significant in iOS 5.1, it does include text that suggests a Sprint iPad 2 Wi + 3G model might be coming. According to the release's What's New document, iOS 5.1 includes better dictation support for third-party apps. Unfortunately, the notes don't mention improved battery life for the iPhone 4S, although we're pretty sure Apple is working on that with this release. After all, they've had quite a bit of time to resolve this issue. The most interesting news about this release so far, comes from 9 To 5 Mac, which reports that it contains references of a new iPad:

In the just released beta of iOS 5.1, Apple has outed yet another new device. We recently brought you the first references to the upcoming, faster Apple TV internally dubbed 3,1, and now we have iPad 2,4 on our hands.

MacRumors suggests this iPad 2,4 is actually a Sprint iPad 2, stating:

Naturally, "iPad2,4" could represent a Sprint supporting variant of the iPad 2 that has been previously rumored. Apple was reportedly considering a Sprint iPad launch before the holidays, though it seems less likely at this late date. At this stage, it's not clear if and when Apple might introduce such a model or wait until the iPad 3 launches to introduce Sprint compatibility.

Once we learn more about iOS 5.1, we'll let you know here and update the post... 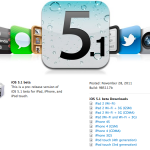 Apple Releases iOS 5.1 To Developers - Includes Mentions Of The iPad 3?

Apple Releases iOS 5.1 To Developers - Includes Mentions Of The iPad 3?
Nothing found :(
Try something else