You are using an outdated browser. Please upgrade your browser to improve your experience.
by Bryan M. Wolfe
November 28, 2011
The iPhone 4S is less than six-weeks old, but rumors have already begun concerning the next-generation iPhone. The latest rumor, courtesy of Macotakara, suggests Apple suppliers are already shipping 4-inch LCD screens for next year’s “iPhone 5.” According to the report, Hitachi Displays Ltd. and Sony Mobile Display Corp. are the two suppliers providing the new screens for “a new iOS device.” Unless this suggests an “iPad mini,” this new device is almost certainly the next iPhone. Since it arrived on the scene in 2007, the iPhone has always had a 3.5-inch screen, even though many of Apple’s competitors have increased the screen size of their handsets to 4-inches and beyond. Of course, we've heard these type of rumors before. Throughout much of 2011, numerous stories suggested the next iPhone would include a larger display and a body radically different than the iPhone 4. Of course, these rumors were proved false when Apple unveiled the iPhone 4S on October 4, an iDevice that looks just like its predecessor. Assuming Apple suppliers are indeed already producing 4-inch screens, the iPhone unveiled in 2012 looks to be the one many expected last month. Stay tuned. [Photo: 9 to 5 Mac] 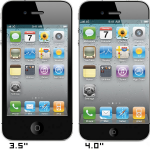 Apple Suppliers Already Shipping 4-Inch Screens For Next iPhone
Nothing found :(
Try something else