You are using an outdated browser. Please upgrade your browser to improve your experience.
by Bryan M. Wolfe
November 29, 2011
In a last minute attempt to save its planned acquisition of T-Mobile, AT&T is turning to a little-known U.S. carrier for assistance. The No. 2 U.S. carrier is in talks with Leap Wireless to sell it some of T-Mobile’s business, hoping the move will convince the Federal Communications Commission (FCC) to approve the AT&T-T-Mobile deal, according to The New York Times. First announced last March, AT&T’s planned acquisition of the No. 4 U.S. carrier, T-Mobile, has been on life support since the U.S. Department of Justice announced plans to block the deal. It has gotten so bad that AT&T on Thanksgiving quietly announced it had withdrawn the deal’s application to the FCC. This move, however, doesn’t mean AT&T is giving up. Rather, the company is simply reconfiguring how a merged AT&T/T-Mobile would affect the mobile carrier business as a whole. Enter San Diego, California-based Leap Wireless, which owns Cricket Communications. According to The Times:

But AT&T has been secretly working on an audacious 11th-hour deal to salvage the transaction: AT&T is knee-deep in talks with Leap Wireless, a second-tier but growing wireless player, to sell it a big piece of T-Mobile’s customer accounts and some of its wireless spectrum, according to people involved in the negotiations.

By giving Leap just enough of T-Mobile’s business to make it the nation’s new No. 4 carrier, AT&T hopes to “placate the Justice Department enough for it to drop its opposition to AT&T’s acquisition of T-Mobile, these people said, or at least to strengthen AT&T’s hand if it goes to trial.” Will AT&T’s latest move work?

According to people involved in the decision-making process, the lawyers put the chances of success at 60 to 70 percent. 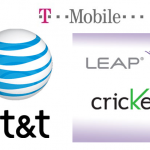 AT&T Takes A Leap To Save T-Mobile Deal

AT&T Takes A Leap To Save T-Mobile Deal
Nothing found :(
Try something else