You are using an outdated browser. Please upgrade your browser to improve your experience.
by Bryan M. Wolfe
November 7, 2011
While you wouldn't know it from Apple’s latest marketing campaign, the Siri voice assistant service remains in beta. As such, it doesn’t contain some of the features that will likely be added in the future. Case in point, Siri is currently unable to launch third-party apps. However, there is a way to do this, according to iDownloadBlog. To do so, you must use something called URL Schemes. Luckily, the iPhone URL Schemes wiki page lists many of these commands, which have been used in the past for some interesting tweaks. For example, in August @comex uncovered a shortcut, tellock://, which when entered will lock your phone in some strange way. Another one, lets you create fake FaceTime call. In this example, you must create separate “contacts” for each app you want Siri to open and then add to it a list of URL Schemes. For example:

To create a Facebook shortcut for Siri, make a new contact and call it something like “Facebook Shortcuts.” Then, add a bunch of the URL schemes from above. After you’ve made the contact, tell Siri something along the lines of “show Facebook shortcuts.” Tapping each of the URLs will open the associated action in the Facebook app. Again, it’s not the prettiest trick in the world, but it’s functional. There’s really unlimited possibilities when it comes to these URL scheme triggers, so I encourage you to check out the handleOpenURL database for more third-party app schemes. Here are some more examples for stock iOS apps: itms-apps:// – Open the App Store maps:// – Open the Maps app sms:// – Open the compose window of the Messages app music:// – Go to the currently playing song in the Music app youtube:// – Open the YouTube app itms-books:// – Open the iBooks app

While even iDownloadBlog admits this isn’t the “cleanest method,” for now, it appears to be the only solution to have Siri open apps automatically. Personally, I’ll wait until Apple provides this feature seamlessly. Still, it's a nice find. 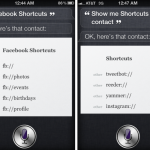 How To: Teach Siri To Open Third-Party Apps

How To: Teach Siri To Open Third-Party Apps
Nothing found :(
Try something else