You are using an outdated browser. Please upgrade your browser to improve your experience.
by Bryan M. Wolfe
November 15, 2011
Hours after releasing its iTunes Match service to the public, Apple is providing customers with additional information by way of their support site, according to news first reported by 9 To 5 Mac. Taken together, these documents should answer most of the questions many are having about Apple's song matching service. Here are some of the highlights. The first is this chart that explains what each of the iTunes Match icons mean. These show up within iTunes after adding a computer to iTunes Match. Apple also released four additional support documents, each worth reviewing.   We’ve received a number of emails yesterday and today from readers wanting to know what happens to local copies of songs through iTunes Match. According to a tipster in the MacRumors forum, these songs stay in iTunes unless they are MANUALLY removed.

Nothing happens to your local music when you run match. If you have a lower quality song that was matched you can remove it from your local library and then replace it with the 256k version. What happens is you delete the song, but the entry in iTunes stays, but a little cloud now shows up in a newly added column that shows you that you have a song that is in the cloud but not in your library. You can click on the cloud and it will download it to your local library, where again it is now permanently yours at the higher bit rate.

In addition, we’d like to clarify and explain the often noted 25,000 song iTunes Match limit. While this number does not include songs purchased in iTunes, songs matched do count against this limit. In other words, songs burned from a CD do count against the 25,000 limit. Remember also that iTunes Match only works with songs. In other words, it excludes audiobook, ringtones, iTunes LPs, and iTunes Extras. Again from 9 To 5 Mac:

Your limit is 25,000 songs and purchased from iTunes don't count, but matched does. Again if you have personal recordings etc. they won't match (obviously) but will be copied to the cloud in their current format.

In terms of file formats and iTunes Match, Apple states: As a reminder, iTunes Match is available via iTunes 10.5.1 for $24.99/year. For more information on iTunes Match, please see our original review. Have any additional questions? Let us know by using the comments below. 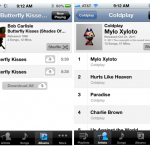 iTunes Match - Your Questions Answered
Nothing found :(
Try something else