You are using an outdated browser. Please upgrade your browser to improve your experience.
by Lenny Liang
November 12, 2011
Technopathy is the ability to control machines with your mind. It is a superpower possessed by characters, such as Micah Sanders from the television show "Heroes," and Hank Henshaw, the Cyborg Superman. It isn't real, or it wasn't. The hackers at Project Black Mirror hope to turn this superhero fantasy into consumer reality. As reported on intomobile.com, the project aims to transform your thoughts into Siri voice commands, through the use of ECG pads, which track brain patterns. This information is sent to an Arduino test board, where the incoming analog signals are matched to digital patterns saved on a MacBook. The team currently has about 25 patterns linked to specific Siri commands. Once a command is matched, it is sent to a speech synthesizer chip. In terms of specific details, intomobile.com provides the following:

1. ECG pads provide raw skin conductivity / electrical activity as analogue data (0-5v). 2. This is plugged into the Arduino board via 4 analogue inputs (no activity = 0v, high activity = 5v). 3. The Arduino has a program burnt to it’s EPROM chip that filters the signals. 4. Josh trained the program by thinking of the main Siri commands (“Call”, “Set”, “Diary” etc.) one at a time and the program where we captured the signature brain patterns they produce. 5. The program can detect the signature patterns that indicate a certain word is being thought of. The program will then wait for a natural ‘release’ in brain waves and assume the chain of commands is now complete and action is required. 6. The series of commands are fed to a SpeakJet speech synthesiser chip 7. The audio output of which simply plugs into the iPhone’s microphone jack.

For a visual demonstration, Project Black Mirror recently sent the following video to Kickstarter in an effort to raise funds. While this type of mind-over-machine technology is known, Project Black Mirror looks to apply it in an innovative way, to a technology (Siri) that is already pushing the boundaries of innovation itself. Many iPhone 4S users are still getting used to controlling Siri with their voices. Soon, they may do it with super powers. 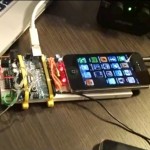 Project Black Mirror Uses Mind Control On Siri
Nothing found :(
Try something else