You are using an outdated browser. Please upgrade your browser to improve your experience.
by Bryan M. Wolfe
November 10, 2011
In the United States, Siri’s voice is female. However, in the United Kingdom, Apple’s voice recognition software has a male voice who answers to the name of “Daniel.” Now, the person behind the voice is speaking out about how Siri came to be and about an interesting conversation he recently had with someone in Apple’s PR department, as reported by The Telegraph. Hired originally by Scansoft, Jon Briggs is the voiceover artist behind “Daniel.” Over the course of three weeks in 2005, Briggs recorded 5,000 sentences that would eventually become Siri, got paid, and went on with his life. However, Scansoft soon merged with Nuance, which Apple then acquired in 2010. In October, Apple shipped the iPhone 4S with Briggs’ voice included. According to Briggs:

“I did a set of recordings… spoken in a very particular way and only reading flat and even. Then they go away and take all the phonics apart, because 'I' have to be able to read anything you want, even if I’ve never actually recorded all those words.”

Briggs’ voice is also used to create the announcements at Kings Cross railway station, among other applications. Most surprisingly, Briggs didn’t know he was the voice behind Siri until he saw an iPhone 4S demonstration on television last month. Soon after, Briggs received an call from someone at Apple.

The caller, who identified herself as an Apple public relations representative, told Mr Briggs that he should not talk publicly about Siri. Apple employees were not authorised to discuss its products, she warned. “We’re not about one person,” the caller said. Mr Briggs however pointed out that he had recorded the thousands of sentences used to create the British Siri persona “Daniel” six years ago for another company and had never had a contract with Apple. The firm has not been in touch since, Mr Briggs told The Telegraph.

Take a look at Briggs as Siri: What’s most surprising here isn’t that Apple contacted Briggs, but rather how long ago Siri’s voice was actually recorded. It’s also interesting knowing that Briggs’ recordings are also being used elsewhere despite Apple, well, being Apple. We’ll keep you updated on this story and let you know if and when Apple tries to contact Briggs again. In the meantime, you can have Briggs on your own iPhone 4S, regardless of your location, by going Settings > General > Siri and selecting English (United Kingdom) as your voice. Enjoy! 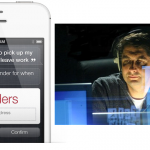 Say Hello To The Voice Behind Siri - In The U.K.

Say Hello To The Voice Behind Siri - In The U.K.
Nothing found :(
Try something else