You are using an outdated browser. Please upgrade your browser to improve your experience.
by Lenny Liang
November 27, 2011
There has been much fascination with the things that Siri says. Now, you can put words in Siri's virtual mouth. A Web app has been released on ifakesiri.com which allows users to create their own conversations with Siri. It's simple to do. You go to the Web site, choose a carrier, and then enter your conversation in the format specified. An authentic looking screenshot will appear, which you can then share through a variety of methods, such as email, Facebook, and Twitter. Aside from the Siri conversation entry box, the most notable feature of the Web app is its large banner link to ifaketext.com which allows you to create fake iPhone text messages. I note that as a public service announcement, so you won't get snookered by a prank. Getting Siri's responses to odd questions is a lot of fun, as is writing them with the IFakeSiri Web app. Now all that's needed is a dedicated iOS app. (via iDownloadBlog) 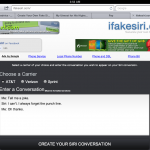 Web App Allows You To Fake Siri Messages
Nothing found :(
Try something else