You are using an outdated browser. Please upgrade your browser to improve your experience.
by A.T. Faust III
December 5, 2011
The University of Colorado's Paul Ohm said it was coming, and now it's finally here: the first class-action lawsuit against Carrier IQ and its industry partners. Filed in the district court of Delaware by Sianni & Straite LLP, the suit names Apple, HTC, Samsung, Motorola, AT&T, Sprint, and T-Mobile as defendants, alleging that the group propagated an "unprecedented breach in the digital privacy rights of 150 million cell phone users." In doing so, AppleInsider reports that the companies have presumably run afoul of the Federal Wiretap Act, the Stored Electronic Communications Act, and the Federal Computer Fraud and Abuse Act. Still, the proceedings seem a bit premature, as it remains far from certain exactly where responsibility lies in this potential lapse in security. While Apple's deprecated Carrier IQ implementation never used sensitive or identifying information, Android-based handsets haven't been so lucky; and the blame in said data harvest's been tossed about from manufacturer to carrier to Carrier IQ itself. Right now, nobody seems to know whom to blame. Except for Sianni & Straite, who just blame 'em all. Read a copy of the official lawsuit filing here. Update: Links fixed to reflect revised source location. 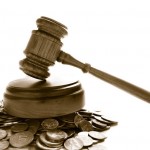 Apple Among Those Named In Class-Action Carrier IQ Filing

Apple Among Those Named In Class-Action Carrier IQ Filing
Nothing found :(
Try something else