You are using an outdated browser. Please upgrade your browser to improve your experience.
by Tommy Ly
December 16, 2011
Apple products and rumors seem to go hand in hand. A new rumor seems to come up every week. While some are obviously nothing more than speculation, a few may have some credibility to them. Of course, nothing can be confirmed until Apple makes an announcement, or one of their employees loses a product prototype at a bar. The topic of today's gossip is the iPad. While the iPad 3 (or whatever it will be called) is expected to launch in four months, Apple may have something else in store for us as well. As Digitimes reports, Apple may be releasing a 7.85-inch iPad in 2012.

Apple is likely to launch a 7.85-inch iPad prior to the fourth quarter of 2012 in addition to a new iPad scheduled to be released at the end of the first quarter, according to sources in the supply chain.

If this is correct, it means that we will be seeing both the next generation iPad and this new, smaller iPad in the same year. While launching two new iPad models in the same year may not seem like a very Apple-like thing to do, Digitime's sources state that the proposed 7.85-inch iPad will be Apple's way of competing with Amazon's Kindle Fire.

However, in order to cope with increasing market competition including the 7-inch Kindle Fire from Amazon and the launch of large-size smartphones from handset vendors, Apple has been persuaded into the development of 7.85-inch iPads, the sources indicated.

If you consider that Apple wants to make the iPad a mainstream computer, it does make sense to have various models to target more users. However, Apple has been very clear in the past that according to them, you can't make a proper tablet smaller than the iPad. Therefore, don't really count on this rumor having much validity. Of course, Apple has lied to us before. Would you like to get your hands on a smaller iPad? Let us know in the comments. 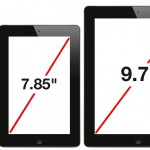 Rumor: Apple Releasing 7.85-Inch iPad Next Year
Nothing found :(
Try something else