You are using an outdated browser. Please upgrade your browser to improve your experience.
by A.T. Faust III
January 10, 2012
Amazon has finally released a decent iPad shopping experience for its popular Kindle bookstore. Called the iPad Kindle Store, Amazon's overhauled service is available as an HTML5-based web app accessible via mobile Safari. 9to5Mac was particularly smitten by the production, saying that

the web interface totally feels like a native app. It is smooth, natural and supports familiar touch gestures, like swiping left and right to brows the store’s virtual shelves. The design calls for big cover images, large buttons and elegant typeface that’s easy on the eyes…

Not so fast. Listen, the iPad Kindle Store is good, but it feels nothing like a native app. It's clunky, it's laggy, and scrolling has serious framerate issues. Yeah, the big cover images, searchable libraries, user reviews, top lists, and touch-friendly layouts make using the new store a great deal more intuitive than Amazon's previous tablet-based efforts (if you can call them "efforts"), but this thing is far from refined. Just like the Financial Times' web-based offering, it's well crafted and considered, but it just can't match the appreciable efficiency of native iOS code. That said, had the iPad Kindle Store been around before Apple kneecapped Amazon's iPad presence, I might still be a customer of the platform today. It's infinitely better than browsing the old Kindle site. [Image: tuaw.com] 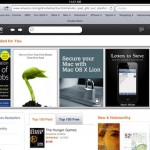 Amazon's iPad Kindle Store An Easier Way To eShop For eBooks
Nothing found :(
Try something else