You are using an outdated browser. Please upgrade your browser to improve your experience.
by Robin Rhys
January 18, 2012

As many of you may have noticed, the Web is rather dark today. Yes, AppAdvice.com, is not the only site blacking out today, if you did your usual Google search for pink accessories this morning, you may have gotten a link for Wikipedia that took you to a black page. Sites like Wikipedia and reddit are going dark in protest of SOPA and PIPA, the Stop Online Piracy Act and the Protect IP Act. On today's AppAdvice Daily we take a look at what SOPA and PIPA are, why you should care, and what you can do to help.

So what are SOPA, the Stop Online Piracy Act, and it's partner in crime PIPA the Protect IP Act? Well, they are just House and Senate versions of the entertainment industry's attempt to stop piracy, and change the way the Internet works. If either are passed, private corporations would have the power to shut down sites that let you download copyrighted material like music, TV shows and movies. A lot of the sites that provide this material are not in the U.S., which means the laws we already have, don't apply to them. Pirate Bay is probably the best example of one of these sites. So in order to get a site like Pirate Bay to stop what they're doing, PIPA and SOPA would one, give the government the power to block domains that break the law. Two, companies would be able to sue any site that linked to the infringing sites, and three - PIPA and SOPA give the government and corporations the power to cut off funding to these sites. But, the funny thing is, even after doing all that, it still won't stop downloaders and piracy, because you'll still be able to access a blocked site by just entering their IP address. So while it won't stop downloaders, it will stop innovation.

Since media giants would be able to sue pretty much any site they feel like, without any repercussions, smaller companies would crumble from legal fees, and big guys would prosper. So big sites like YouTube, and Facebook, or sites like AppAdvice, and even your mother's blog on the '60s would have their freedom of speech, and right to expression threatened, if not pulled out from under them. Basically, any site that used an outside link would be at risk. Not to mention, those who run the sites could be threatened with jail time of up to five years if found in violation. So, do you want to give the government the power to essentially black list sites that they think violate the act? It would be like the red scare all over again, only on the Internet. Ok, you might we're being a little dramatic here, but not really. This is the exact same thing that Iran and China do to their Internet. If you want to see how it will affect you, go over to Beijing and type in Facebook.com, oh yeah, it doesn't exist.

Now that all of you are ready to scream out stop SOPA, how can you show your support? First write to Congress. It's easy, especialy with that link. Go to 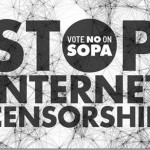 AppAdvice Daily: Stop SOPA And PIPA Now!
Nothing found :(
Try something else