You are using an outdated browser. Please upgrade your browser to improve your experience.
by Lenny Liang
January 11, 2012
At CES this year, Blue Microphones presented three new offerings for mobile recording: the Tiki, Spark Digital, and Mikey Digital.

Tiki looks like a snail, but is said to have great intelligence. According to Blue's Web site, "The new Tiki is the world's first USB microphone that mimics the intelligence of human hearing by focusing on desired sounds, minimizing background noise and knowing when to mute altogether." It is designed to differentiate between podcasters, Skype users, and musicians. There are two modes to Tiki. The first is an Intelligent Speech Mode designed to bring voice to the forefront, while eliminating unwanted background noise. There is also a Natural Recording Mode meant to capture various sounds with an exceptional amount of clarity. Tiki is designed for a PC or Mac with USB 2.0+ and will carry a recommended retail price of $59.

Next is the Spark Digital, which is said to be the first studio-grade condenser microphone with both iPad and USB connectivity. It will include Focus Control, which allows two different sonic options with the push of a button. The Spark Digtial will also come with an adjustable desk stand, as well as a built-in shock mount. It has volume, gain, and instant mute control and works with a number of recording applications, including Apple's GarageBand app. It will cost $199.

Finally, Blue announced the Mikey Digital, which is the digital sibling of the previous Mikey mic. The Mikey Digital is designed for the iPod touch (fourth generation), iPhone 4S, iPhone 4, iPad 2 and iPad. It has automatic or manual gain control, and an input jack for line-out devices. It also works with most popular recording apps. The MSRP for the Mikey Digital is $99. Some firsthand reactions to Blue's new mics can be seen on Engadget and The Verge. 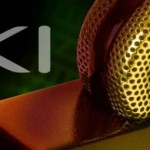