You are using an outdated browser. Please upgrade your browser to improve your experience.
by Jamie Young
January 7, 2012

I recently received an email from my brother with a link to a Daring Fireball post in which John Gruber commented on a blog post by Fraser Speirs on iOS multitasking misconceptions.

My brother was right. I am obsessive about ridding my multitasking bar of apps I’m no longer using, as I am sure a lot of other users are too. Not only did I think that purging them would help my iPhone battery life, but I thought they were taking up extra, unneeded memory.

The misconception that Speirs discusses at length in his post is that killing the apps on your iDevice is beneficial to the overall productivity and usage of your iDevice. The worst part about this is that we've heard this from Apple store employees as well.

I realize a lot of you may have known this already, but this article is for those, like me, who thought that killing apps in the multitasking bar helped preserve memory and, in turn, battery life. This is not the case. As Speirs sums up:

Let me wrap this up by giving you a quick summary:

Put simply: you do not have to manage background tasks on iOS. The system handles almost every case for you and well written audio, GPS, VOIP, Newsstand and accessory apps will handle the rest.

Because of the response to his post, Speirs did add a short video to his blog, showing us in real time exactly what he meant.

So, there you have it. By ridding your device of those apps in the multitasking bar, you’re not improving your iDevice experience at all. Think of it more as a way to view your “app history” (like browser history). However, killing these apps is a great solution if one of them is freezing up — don’t forget that.

I’m certainly not going to be able to stop obsessively killing apps altogether, as it is a part of my OCD behavior and would be hard to change that, but I will definitely be at ease knowing that it doesn’t matter from a performance standpoint.

Did you already know this, or were you just as shocked as I was? 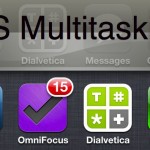 Fact Or Myth: Killing Apps In The iOS Multitasking Bar Boosts Performance
Nothing found :(
Try something else