You are using an outdated browser. Please upgrade your browser to improve your experience.
by A.T. Faust III
January 23, 2012
Apple is set to report its official sales and download figures for iBooks 2.0's new education-oriented offerings tomorrow. In the meantime, however, the cat's clawing its way out of the bag to make its customary (and customarily premature) internet rounds. Using a proprietary monitoring solution, analyst firm Global Equities Research estimates Apple to have delivered roughly 350,000 e-textbook downloads in just three days. While many of these may have been E.O. Wilson's Life on Earth (which is basically a free e-textbook tech demo), the figure still represents a strong step forward for Apple. And, according to John Paczkowski of AllThingsD, that's a decided boon for publishers, too:

[T]he supply chain markup on textbooks ranges between 33 percent and 35 percent. So there are savings to be had in cutting out that publisher-to-distributor-to-wholesaler-to-retailer process. Add to this the lower cost of iBook production, which the research outfit estimates to be 80 percent less than print publication — and a system under which textbooks are sold directly to students, who use them for a year, rather than to schools which keep the texts for an average of five years — and the math here starts to looks pretty good.

Indeed, the math does look pretty good. Of course, that's what they said about iBooks 1.0 back in 2010, and the service has been generally considered a fair flop ever since. 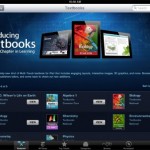 iBooks 2 Serves 350,000 e-Textbook Downloads In First Three Days
Nothing found :(
Try something else