You are using an outdated browser. Please upgrade your browser to improve your experience.
by Lenny Liang
January 9, 2012
Reminders With Friends, by Slyce Apps, attempts to make reminders more social. While Apple's Reminders app allows you to send location-based reminders to yourself, Reminders With Friends also allows you to send date and location-based alarms to your friends and family members. There are some useful possibilities with such a feature. For example, parents could remind their children to call when they arrive at a new place. Or a kid could remind his or her parents to pick up snacks, just as the parent arrives at the grocery store. In this sense, Reminders With Friends presents an interesting idea. It also has a big problem. It doesn't work, at least not yet. Although the app is not a game, it uses Game Center integration. The intention for doing so is to help users and their friends avoid signing up for yet another standalone service. It is a well-meaning motivation. Unfortunately, motivation is meaningless, unless the Game Center integration is quick, simple, and effective. It isn't. The app was tested by multiple people, on separate occasions, with a number of different parameters. The process of connecting through Game Center was extremely complicated, as both friends had to not only be Game Center contacts, but also had to invite the other person to the Reminders With Friends app, through Game Center. The process to do so was confusing. Sometimes, your friend showed up as someone you could remind, but not as someone who could remind you. Other times the same friend would show up more than once on a list. There was also an instance where a friend showed up on a list, only to later disappear and need to be re-invited. Related to that issue was the fact that there is no real reminder management system to organize which reminders were sent and which were received. The app could really use basic workflow management features, like an inbox and an outbox. The biggest problem with the app, however, is that it did not reliably perform the functions it promised. Multiple location-based reminders were sent, and only a small percentage of them were actually delivered. Some of the messages were delivered, but at the wrong time or place. For example, my friend sent me a location-based reminder set to go off when I arrived at Mount Everest (which I've never been to). I got the reminder immediately, thousands of miles away from the intended target. I then sent location-based reminders to my buddy, to be triggered at a Krav Maga school 10 minutes away from him. No reminders were received. Even if Slyce Apps were to fix these basic execution problems, it's still lacking some of the more advanced features that iDevice users have come to expect from their Reminders App, such as Siri integration. To its credit, the developers at Slyce responded to this writer's critique with the utmost professionalism. Changes are being made, and an update will soon be submitted. It's also conceivable that Apple could eventually make this app obsolete by releasing an update, which allows users to do the same thing, but directly through their contacts list. In the meantime, Reminders With Friends is worth keeping an eye on, but not worth buying. Update: The developer has decided to remove this app from the App Store at this time. Please see the comments section below for a letter of explanation from the developer. 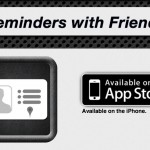 Reminders With Friends: Good Intentions With Poor Execution (Updated)
Nothing found :(
Try something else