You are using an outdated browser. Please upgrade your browser to improve your experience.
by A.T. Faust III
January 4, 2012
Mathematical analysis is all well and good, and, done responsibly, it can be expected to deliver little more than a modicum of marginal error. Still, such data in the hands of those unable to properly interpret it can be a dangerous thing. Take analyst Travis McCourt of investment firm Morgan Keenan, for example. Using Amazon's recent statements that the company sold over a million Kindles each week in December, McCourt stumbles his way to the conclusion that (via AppleInsider),

Say what? Four to five million Kindle Fires sold? One to two million iPads hung out to dry? That's crazy talk. If I were an investor represented by this guy, I'd do a lot more than just raise a skeptical eyebrow. Here's why: The assumption that the Fire sold particularly well is based on nothing more than Amazon's own carefully-crafted vagaries. Amazon, as we all know, does not report individual unit sales to the public. Instead, they lump all sales of all units together, using model-against-model comparisons to talk up the general success of each. Marco Arment explains the issue in detail:

Here’s exactly the kind of conflation Amazon wants: a headline referencing the “over 1 million Kindles per week in December” stat from Amazon PR in an article that only mentions the Kindle Fire, implying that Amazon has sold over 4 million Kindle Fires to date.

Through his own analysis (outlined in the above-referenced post), Arment concludes that all we know for sure is that Amazon has "sold at least 400,001 Kindle Fires in December." What's the real number? Nobody knows. But it's probably a lot closer to 400,001 than four million. Even if we give Amazon the benefit of the doubt and take the exact middle road of possible units sold, that puts the Fire in just over two million households for all of December. Adjusting McCourts numbers, that would put iPad losses at around 750,000 units. That's a tiny bit more believable, but it still assumes that each Fire Amazon sells costs Apple one third of an iPad. In other words, for each three people buying Amazon's tablet, one of them would've purchased an iPad but didn't. It just doesn't feel right. The devices are so different in advertised focus and public appeal that their target audiences appear to have very little overlap. Honestly, until there's some sort of sophisticated, large-scale, sales-supported survey on the subject, the Fire's effect on Apple's tablet dominance is going to remain a mystery. But, as Apple continues to move record numbers of iPads worldwide, the answer may never actually matter. 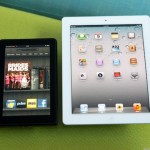