You are using an outdated browser. Please upgrade your browser to improve your experience.
by Stella Violano
February 22, 2012
In a news brief, Dutch Police are crediting an iPhone for saving the life of a Rotterdam man after he was attacked by gunmen. The victim, a 49-year-old contractor, was in his van at the Spang Quay near the Spangesekade when unknown individuals approached the vehicle and opened fire. Five bullets tore through the vehicle, the first of which struck the man in the chest, a wound that would have proven fatal had it not been slowed down by striking the victim's iPhone first. Police stated that the other four bullets missed the victim, possibly because the first bullet shattered the auto glass, obstructing the assailants view of the occupant. "I had not one, but six angels on my shoulder" stated the victim, as translated through Google, "The bullet went straight through my phone back and then only lightly in my chest." The victim, who preferred to remain anonymous over fear of further violence, has the bullet-damaged iPhone in a place of honor in his home. The man smiled as he said "My iPhone saved me." While the model of iPhone the man used was not identified, we would like to think that it was the ever-faithful Siri on an iPhone 4S took that bullet for him. Regardless, we are impressed at yet another way the iPhone has proven itself to be invaluable to users. 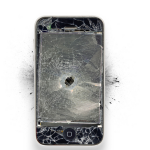 An iPhone Takes A Bullet And Saves Its Owners Life
Nothing found :(
Try something else