You are using an outdated browser. Please upgrade your browser to improve your experience.
by A.T. Faust III
February 3, 2012
The winds of change are blowing around Apple HQ. Well, not really, but it seems that the Cupertino company is starting to enforce a peculiar, never-before-used policy regarding app developers and their advertising rights. Simply put, Apple no longer wants third parties using the white iPhone 4/4S as part of their marketing materials. TechCrunch founder Michael Arrington broke the story for Pando Daily:

Recently a startup I know was heavily pressured by Apple to change their iOS app marketing material. The problem? The app was shown with a white iPhone image on their website. ... Apple has clear guidelines on the use of ios device images. There’s no specific rule about using only black device images, but there is a requirement that only approved images can be used. All of those approved images are black. The private written communications I’ve seen from Apple, though, are quite clear on the restriction. In verbal communications they’ve said that they’re reserving use of the white iPhone for their own marketing materials.

While details are scarce (read, "nonexistent") on which startup was so affected, Arrington notes that other apps, including Flipboard and Path, have been using the white iPhone for a long time with no complaints or C&Ds from Apple. Logically, there doesn't seem to be any real reason for Apple to lock down its white iPhone. Logistically, the manufactory issues with the color were long ago remedied, so there shouldn't be a shortage in future production, either. Ergo, we doubt Apple's trying to keep demand lower for the variant. True, lots of folks think the white iPhone is more elegant and aesthetically "clean," but it's no more premium than the black one, is it? That said, we have a feeling the likes of Flipboard and Path won't be asked to restrict their promotions. Of course, those are both established, high profile apps for iOS, and Apple might be a little more reluctant to bite the hand that feeds it (or, at least, that feeds it well). 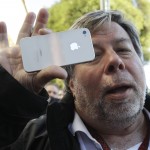