You are using an outdated browser. Please upgrade your browser to improve your experience.
by Bryan M. Wolfe
February 24, 2012
Proview Electronics Co., a unit of Proview International Holdings, the Chinese company that originally owned the “iPad” trademark in China is now suing the tech giant in the United States. As such, they plan on seeking $2 billion in compensation, according to All Things Digital. In 2009, Apple paid Proview $55,000 to purchase the worldwide rights to the iPad trademark. Now, however, Proview contends it was bullied “with oppression, fraud and/or malice.” Therefore, the company has filed suit in the Superior Court of the State of California in Santa Clara County. According to the report, Proview’s position is shaky as best.

Evidently, if Proview had known Apple’s plans for the trademarks, it would have held out for a lot more than the $55,000 it ultimately sold them for. But it didn’t. And now they are trying to retroactively rejigger the deal through the courts, seeking to rescind the original agreement and prevent Apple from using the iPad name on its products.

An attempt by Proview to win a ban to stop Apple from selling iPads in Shanghai was stopped earlier this week when a court there rejected the case pending the resolution of a comparable lawsuit in a higher court in China. For its part, Apple has provided a Dec. 23, 2009 contract signed by a Proview representative as evidence that the deal is sound. In it, Proview gave Apple “powers and benefits belonging or accrued to the [iPad] trademarks, including the right to sue for past infringements and passing off.” It will be interesting to see what happens with this court case. Most likely, the suit will either be thrown out, or Apple will quietly give Proview additional monies to make the issue go away. Regardless, it is highly unlikely that Apple will stop using the iPad name anytime soon, either in China or elsewhere. Any ideas how this issue will be resolved? Would Apple actually lose the right to call the company's tablet an iPad? For more on this topic, be sure to check out A.T.'s most recent piece on this story located here. 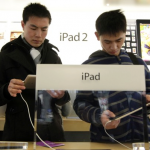 Apple Sued In US Over iPad Trademark

Apple Sued In US Over iPad Trademark
Nothing found :(
Try something else