You are using an outdated browser. Please upgrade your browser to improve your experience.
by A.T. Faust III
February 22, 2012
Sometimes, I really think Biggy was onto something with that whole "mo money, mo problems" bit. Fame certainly makes for a nice, big target, and once again, the scavenging trolls are hobbling out to feast on Apple's overwhelming success. Following in the footsteps of last year's Lodsys unpleasantness, Brandywine Communications Technologies has filed a claim in Florida court seeking compensation for Apple's unauthorized use of the firm's visual voicemail patents. Numbered 5719922 and 6236717, the patents -- both very similar in scope -- are officially described thus (via GigaOM):

The patents seem to describe in loose terms part of what iOS' voicemail implementation actually does, but there are several question marks going forward. The usual ones, like "prior art" and inequitable conduct, will certainly be considered, and Apple may also attempt to differentiate its iPhone from the "personal computer" designation used (or implied) in Brandywine's filings. (After all, there is plenty of argument over whether or not the iPad's a PC, much less its smaller, more portable sibling.) It'll be interesting to see how this case plays out, but, in all likelihood, Brandywine will simply keep up the patent troll status quo: They'll make headlines for a week or two, file a few lawsuits, get held up for months or years in the courts, and we won't hear about them again for a nice long while. 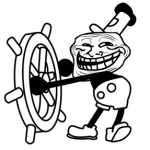 Brandywine Communications Technologies Sues Apple Over Visual Voicemail
Nothing found :(
Try something else