While we are all still waiting for the Clear todo app that I originally told you about a few weeks ago, it seems some people are taking advantage of those that are eager for the simplified todo manager. Please be aware, the real Clear app will be coming out this Wednesday, February 15.

A developer in the App Store has just released “Clear Todo,” which is a blatant ripoff of RealMac Software and Impending’s upcoming app.

If you go to their “support” page, all you will find is a fancy little graphic saying “Coming Soon.” There is a phone number there, and other contact information, though I’m still pretty sketchy about the entire thing.

This is just a friendly warning – DO NOT buy this “Clear Todo” app. It is a fake, and it is clearly there to just take advantage of those that are awaiting the real thing.

I have been beta testing the app, and from the looks of iTunes reviews, this fake app is nowhere near as good as the real one will be.

So again, do not buy this junk. Wait for the official Clear coming this Wednesday. I will have a full review of the app for you then.

In the meantime, watch this teaser video for the real app if you missed it:

Clear for iPhone (Coming Soon!) from Realmac Software on Vimeo.

UPDATE: The app has now been removed from the App Store. 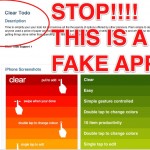 [UPDATED] Fake "Clear" App Spotted In The App Store, Now Removed
Nothing found :(
Try something else