You are using an outdated browser. Please upgrade your browser to improve your experience.
by A.T. Faust III
February 17, 2012
"Sorry it was your turn. It'll be someone else's next week, I'm sure." That's what I said last Wednesday to Joanna Hass, Path's PR spokeswoman, in response to the upstart social network's data-mining debacle. So fast-forward to here and now, and my words have been vindicated. This morning, The Wall Street Journal ran an article exposing Google's hand in

bypassing the privacy settings of millions of people using Apple Inc.'s Web browser on their iPhones and computers—tracking the Web-browsing habits of people who intended for that kind of monitoring to be blocked.

Explaining El Goog's methods (which were also used by a few smaller ad-peddlers), the Journal report goes on:

The companies used special computer code that tricks Apple's Safari Web-browsing software into letting them monitor many users. Safari, the most widely used browser on mobile devices, is designed to block such tracking by default.

mischaracterizes what happened and why. We used known Safari functionality to provide features that signed-in Google users had enabled. It's important to stress that these advertising cookies do not collect personal information.

Of course, those versed in semantics might argue that there's a pretty big difference between "known functionality" and a "known software exploit," and -- according to Apple -- the search giant has indeed taken advantage of the latter. Bugs aren't features, Google! That said, I'd like to make one thing crystal clear: I care as much about this as I do about Path's overblown mistake of yore. It's all much ado about nothing. Still, it's endlessly amusing that the vast majority of users continue to be so outraged by this kind of completely predictable, victimless, "best practice" baloney. So, Google, as you gear up to face a week of petitions, mainstream scrutiny, and the requisite congressional phone call, please accept my condolences: Sorry it was your turn. It'll be someone else's next week, I'm sure. [Image: itthing.com] 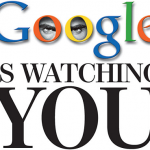 Google Exploits Safari Bug, Tracks Browsing Without Your Consent
Nothing found :(
Try something else