You are using an outdated browser. Please upgrade your browser to improve your experience.
by A.T. Faust III
February 18, 2012
More support for Apple's rumored "iTV" surfaced today. Citing anonymous industry sources, DigiTimes reports that Taiwan-based chipmaker Genesis Photonics has been contracted to provide the necessary LED controller for the mystery set. Of course, Genesis won't be supplying said controllers to Apple itself -- Apple doesn't manufacture its hardware directly. Instead, Sharp Corporation is the presumed party. Last year, in fact, Genesis supplied Sharp with the LED chips found in most of the latter's high-end HDTV lineup. This new arrangement should bolster both companies' future earnings, and it highlights the influence and specific control Apple customarily exercises over its entire supply chain. While LG might also make Apple's HDTVs, it's a pretty safe bet that Samsung -- the world's most popular TV manufacturer for 2011 -- is not on board. The Korean electronics giant recently scoffed at the idea of a competitive Apple set, because, you know, Sharp and LG don't know how to make quality kit. (That's some mighty brash talk for a company actively considering spinning off its LCD arm in the face of dwindling profits and an increasingly untenable industry business model.) All in all, though, today's revelation is just another unconfirmed confirmation for a myth fast becoming Apple's next sure thing. 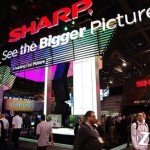