You are using an outdated browser. Please upgrade your browser to improve your experience.
by Tommy Ly
February 10, 2012
Ten One Design, creators of the Fling and Pogo Sketch styluses, seem to have a knack for making nice looking things. Their styluses are slick, and their newest product, the $49.95 Magnus stand for iPad 2 (which we mentioned a few weeks ago), looks like it could be an Apple product. I thought this looked like a great stand to test out, and Ten One Design was kind enough to send me one to review. The Magnus comes packaged in a box containing nothing but a little plastic tray that holds the Magnus itself, and a card that serves as an instruction manual. After pulling the stand out to examine it, I was a little surprised. Its finish is not as nice as I had anticipated. I didn't think you could go too wrong with an all-metal design, but when looking at the Magnus right next to my MacBook and iPad 2, there is an apparent difference in quality. I'm not saying the Magnus doesn't look good, it does, but I was able to easily leave scratches on it with light pressure from my nails. Other than the finish, the Magnus looks great. It looks like it could be the Magic Trackpad's cousin. After putting the Magnus on my desk, there was only one thing left to do: put my iPad 2 on it. I should note that when using this stand, your iPad MUST be in landscape position, and only with the home button on the right. This is because the Magnus uses its built in magnets to attach itself to the magnets the iPad 2 uses for Apple's Smart Cover. Your iPad can only be on the stand one way, and one way only. Once the stand is in use, it looks great. It's like your iPad is floating. I was still able to use my iPad normally; tapping around and swiping with no fear that the Magnus wouldn't hold. The Magnus does its job, but how well? The Good The Magnus stand works as you'd expect. It magnetically holds up your iPad 2. While there currently aren't any other magnetic iPad 2 stands to compare this to, I'd have to say that the Magnus takes the cake. Its minimal, industrial design is very pleasing to the eye. As stated on Ten One Design's website, "This isn't one of those portable travel stands. Leave it on your desk, ok?" I agree. This stand seems like it would be best suited for an office or your nightstand. The Bad Ten One Design has acknowledged and advertised that you need two hands to remove your iPad from the Magnus - one to hold it down, the other to pick up the iPad. The stand is just too light. You can free your iPad with one hand, but you'll take the Magnus with it. Weaker magnets wouldn't ensure a secure hold on your iPad, so I think a little more weight would have been nice. Although this isn't a design flaw, I think the $49.95 price tag may be a tad too steep for a lot of people. Of course there are other stands in the same price range, but those stands also provide protection and offer multiple viewing angles for your iPad. The Magnus is $49.95 and requires that you have no protection on your iPad, but allows it to look great on a desk. I feel that anywhere between $30-$40 would be a fair price. Verdict The Magnus is a beautiful, minimalistic stand for your iPad 2. Price aside, this stand does its job well. There currently isn't another stand like this, so for now, the Magnus has a lot of appeal. It looks great, works great, and matches the device it's intended to hold. The Magnus will have a welcome spot in anyone's workplace, whether or not it's "high-end." The Magnus stand for iPad 2 is available on Ten One Design's website for $49.99. Do you think this stand is worth it? Be sure to let us know in the comments. 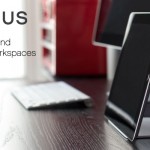 Product Review: The Magnus Stand For iPad 2
Nothing found :(
Try something else