You are using an outdated browser. Please upgrade your browser to improve your experience.
by Andy Nicolaides
February 16, 2012
Hot on the heels of last summer's OS X 10.7 (Lion) release, Apple has just announced OS X 10.8, named Mountain Lion, this morning. Apple seems set to continue their efforts to better integrate the Mac OS with iOS features. Mountain Lion will bring with it some much requested features from iOS onto your OS X machine. The release will include OS X versions of iMessage, Reminders, Notes, Notification Center, Twitter Integration, Game Center and finally AirPlay mirroring. The Reminders and Notes applications sport the exact look and feel of their iOS counterparts. The iCal application now becomes Calendar and works alongside Reminders and Notes beautifully. Thanks to Apple's iCloud infrastructure, it will soon be possible to sync your notes and reminders between all of your Apple devices (well, okay, maybe not your Apple TV). A major enhancement, and likely the nail in the coffin for Growl, is the implementation of the Notification Center in Mountain Lion. Notification Center is going to provide system level notifications. Much like its iOS counterpart this will be accessible and usable to all OS X developers. Mountain Lion's implementation of the Notification Center looks beautifully handled. Whereas the iOS Notification Center can be acccessed by pulling down from the top of the screen, the Mountain Lion version resides in a small area to the right of your screen. The new Notification Center can be accessed by either clicking the new icon at the far right of the menu bar, or by swiping with two fingers at the far right edge of a trackpad. It appears to be a very elegant solution and another strong reason to be using gestures, if you aren't already. A personal favorite addition of mine is the introduction of a new Messages application. Messages is a replacement for iChat that allows for iMessages to be sent and received across both OS X and iOS devices. Messages keeps the same features iChat has now, such as other chat client integration (e.g., AIM), but it will now have iMessage support. So, now, you can continue your conversations uninterrupted across your iPhone, iPad, iPod Touch and now your OS X machine. Make no mistake, this is going to be huge! Apple seems to be well on their way through the development of Messages in Mountain Lion and have made a beta version of Messages available should any of you want to give it a try, which I'm sure you do. All in all, Mountain Lion is shaping up to be a huge release for Apple and will go a long way in helping them to achieve their goal of providing true unity between their two operating systems. With the prospects of Mountain Lion, the iPad 3 and an iPhone 5: 2012 is shaping up to be Apple's biggest year yet. How do you feel about Apple continuing to blur the lines between iOS and OS X? 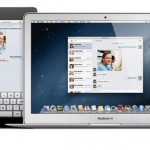 There's A New King Of The Jungle: Apple Announces Mountain Lion
Nothing found :(
Try something else