You are using an outdated browser. Please upgrade your browser to improve your experience.
by Christine Chan
February 8, 2012

When it comes to Twitter clients, there are a lot of choices out there. However, one of the most highly anticipated ones came out only last year, and has remained a personal favorite over here at AppAdvice – Tweetbot.

When Tweetbot first came out, it was pretty barebones, but still functional and amazingly beautiful with the custom Tapbots feel. Over the past several months, the two developers behind Tapbots have been working endlessly to improve and better the overall experience of Tweetbot. Here’s a brief history:

In 1.1, landscape support was brought in.

Enhancements were made in 1.2.

Favstar support was added in 1.3.

With 1.4, it was definitely one of the biggest updates for Tweetbot, with the introduction of native push notifications, which work flawlessly. For me, personally, it made me love the app even more, which I didn’t know was possible. One of the best implementations of native push I’ve seen for a Twitter client.

In 1.5, we finally got the ability to mute annoying users and trends.

Tweet Marker sync was introduced in 1.6, which made it possible to save your spot in the timeline with other Twitter apps that supported the Tweet Marker service.

Today is another rather huge milestone for Tweetbot, with a huge leap to version 2.0.

I had been using 2.0 for a while, and I have been very excited about it ever since I first got it. It is basically what Tweetbot should have been back when it was first released, but I’m glad they waited to implement all of the new features. Just like Apple themselves, they waited because they wanted to get it right. It’s the quality that counts.

The biggest new feature in 2.0 for me are the inline image thumbnails. You can now see a preview of someone’s image before you tap on the link to view it. Of course, now you can either tap on the link or even just the image itself to see the full version. This only works on images that are hosted on one of the supported services though.

Links are now colored and single-tappable – for a lot of people, this was a big one. Gone are the days when you would have to tap on a tweet to select it just to get the links to show up as tappable. See a link you want to check out as you are scrolling through the timeline? Just tap on it, and you’ll be taken to the page immediately.

Direct Messages gets a new view, and it’s very similar to the Messages chat bubbles, although slightly different. It helps to make reading conversations easier, and I welcome the new look.

There is also a timed auto-refresh set to five minutes, so now you don’t have to be constantly refreshing to get the latest in your Twitter timeline, mentions, and DMs. Another big thing is the fact that links in user profiles are now tappable – it was always irritating to look at someone’s bio and see a link, but to non-accessible from Tweetbot. Those days are long gone now, and I couldn’t be happier.

Again, 2.0 is a huge update for Tweetbot, and I just briefly went over some of the bigger changes in the app. The full change log is here:

- Timed auto-refresh (timeline, mentions, and DM’s will refresh every 5 minutes)

If you are looking for the best Twitter client available, then do not hesitate to pick up Tweetbot in the App Store for $2.99 if you haven’t already. I’ve been using it since it was first released, and have never looked back, and definitely won’t now! It’s really the best way to get your Twitter fix on your iPhone.

Have you downloaded the 2.0 update and checked it out for yourself? How are you liking it? Let us know what you think of this major update in the comments! 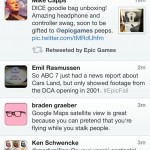 Tweetbot Gets Refined In Major 2.0 Update

Tweetbot Gets Refined In Major 2.0 Update
Nothing found :(
Try something else