You are using an outdated browser. Please upgrade your browser to improve your experience.
by Bryan M. Wolfe
March 9, 2012
In a new court filing, Apple says that it just wants to sell e-Books in the company’s iBookstore and has absolutely no incentive to drive up prices. The claim comes as Apple hopes to have a class action lawsuit over e-Book price fixing thrown out, according to iPaidContent.org. In recent months, both the European Commission and United States Justice Department have targeted Apple and five of the country’s largest book publishers related to claims of e-book price fixing. These investigations and a separate class action lawsuit against Apple all stem from comments the late Apple CEO Steve Jobs made to The Wall Street Journal’s Walk Mossberg prior to the January 2010 announcement of the first iPad. At the time, Jobs said Amazon “screwed it up,” with regards to e-Book pricing. Jobs stated:

“We told the publishers, ‘We’ll go to the agency model, where you set the price, and we get our 30%, and yes, the customer pays a little more, but that’s what you want anyway… They went to Amazon and said, ‘You’re going to sign an agency contract or we’re not going to give you the books.’ “

Now, Apple hopes to have the class action lawsuit thrown out. The company explain that lawyers mischaracterized Jobs’ comments, stating the company simply wants to sell “as many ebooks as possible and that it had no incentive to raise prices.” Besides, Apple argues that if it had a beef with Amazon, it wouldn't have allowed the Kindle app in the App Store. They state:

But this allegation just strings together antitrust buzzwords.. Nor does this “Kindle theory” make sense on its own terms. For example, if Amazon was a “threat” that needed to be squelched by means of an illegal conspiracy, why would Apple offer Amazon’s Kindle app on the iPad? Why would Apple conclude that conspiring to force Amazon to no longer lose money on eBooks would cripple Amazon’s competitive fortunes? And why would Apple perceive the need for an illegal solution to the “Kindle threat” when it had an obvious and lawful one which it implemented – namely, introducing a multipurpose device (the iPad) whose marketing and sales success was not centered on eBook sales?

For its part, the Justice Department is said to be close to filing a formal lawsuit against Apple and the publishers claiming anti-trust. In addition, some of those publishers are said to be in settlement talks with the government. Whether Apple has been involved in price fixing remains to be seen. Still, there is no denying that most of the more popular e-Books available today are priced exactly the same both in the iBookstore at through Amazon. In the end, this fact alone could be just enough to cause Apple further headaches. Do you think Apple was involved in e-Book price fixing? If so, what should be done about it. 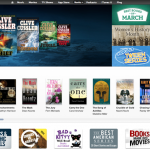 Apple Says There Is No e-Book Pricing ‘Conspiracy’

Apple Says There Is No e-Book Pricing ‘Conspiracy’
Nothing found :(
Try something else