You are using an outdated browser. Please upgrade your browser to improve your experience.
by Bryan M. Wolfe
March 8, 2012
At yesterday’s special press conference, Apple unwrapped a new LTE-capable tablet, the new iPad Wi-Fi + 4G. At the time, it was announced that the personal hotspot feature would be available on the tablet, which allows you to share your data connection with up to five other Apple devices. Unfortunately, we now hear that AT&T and Verizon won’t be offering this feature, at least for the time being, according to 9 To 5 Mac. According to the report, AT&T and Verizon, through Twitter posts, both indicated the hotspot feature won’t be available, at least not when the new tablet is launched March 16.  This, of course, is regrettable given that these are the only two US carriers offering LTE plans for the iDevice. Stranger still, Apple continues highlighting this feature on its US store page. 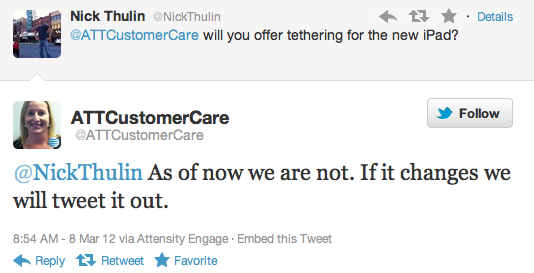 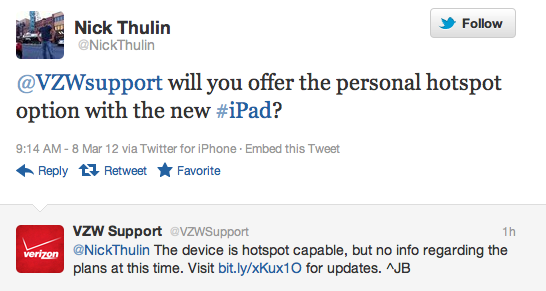 Hopefully, this feature will be made available sooner rather than later. Are you unhappy with this news? Tell us your thoughts. 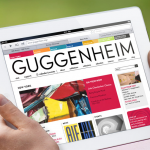 AT&T And Verizon Confirm: No Personal Hotspots On New iPad

AT&T And Verizon Confirm: No Personal Hotspots On New iPad
Nothing found :(
Try something else