You are using an outdated browser. Please upgrade your browser to improve your experience.
by Juli Clover
March 6, 2012
EA isn't adverse to removing its games from the App Store when the games suffer from quality control issues, but EA pulled its newest title, The Simpsons: Tapped Out, for an entirely different reason: the game is just too darn popular. According to Pocket Gamer, a player posted on EA’s help forum to ask about the game, and was given this response from a representative:

To ensure current players have the best possible experience, we’ve temporarily removed The Simpsons: Tapped out from the App Store to limit the game’s server capacity to its current players and address connectivity and lag time issues.

That’s right, EA’s pulled the game at the height of its popularity (which seems like a mistake) in order to reduce the strain on its overloaded servers. Apparently, the company didn't anticipate the excitement a Simpson's freemium game would drum up. Oops. "The response to The Simpsons: Tapped Out has been overwhelmingly positive - so overwhelming, in fact, it has created some connection issues," explains an EA rep on the company’s Facebook Page. 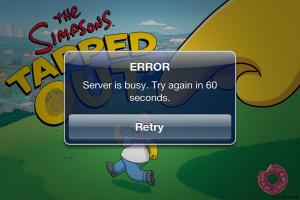 EA might not have to worry about overloaded servers if it keeps the game out of the App Store for much longer - people are liable to simply forget about it. Those of you who have already downloaded the game can continue playing, and you should notice an improvement in gameplay. Be warned, though: there have been issues with lost game progress. If you still remember that the game exists later on, you will be able to download it after EA resolves their server issues and returns the game to the App Store. 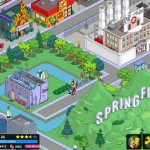 EA Pulls The Simpsons: Tapped Out From The App Store, D’oh!

EA Pulls The Simpsons: Tapped Out From The App Store, D’oh!
Nothing found :(
Try something else