You are using an outdated browser. Please upgrade your browser to improve your experience.
by Bryan M. Wolfe
March 6, 2012
We will eventually hear much more from Steve Jobs, even though the Apple co-founder died last fall. Walter Isaacson, Jobs’ official biographer, recently revealed that he would publish more from his interviews with Jobs, specifically those concerning future products, according to 9 To 5 Mac. Speaking recently in Brazil, Isaacson said that he plans to release an expanded version of the biography that will include Jobs’ full comments about future products, including the long-rumored iTV. However, those words won’t be published until Apple actually unveils something new. To do so beforehand, says Isaacson, would be unfair  “to Apple before they produce the TV…reporting what Steve thought it should be.” Take a look at Isaacson’s full presentation here: What are your thoughts on this interview? 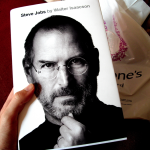 More Words From Steve Jobs Coming - When New Products Are Unveiled
Nothing found :(
Try something else