You are using an outdated browser. Please upgrade your browser to improve your experience.
by Bryan M. Wolfe
March 15, 2012
For those folks who preordered a third generation Apple TV, today could be your lucky day.  MacRumors is reporting that some customers are receiving their new device one day early. Announced at this month’s iPad event, the new Apple TV is 1080p-capable and includes a new interface. Apple doesn’t typically allow U.S. carriers to deliver new products early. However, with the far more popular new iPad set to arrive tomorrow, early Apple TV deliveries could be deliberate.

While the focus is on coordinating an iPad launch for Friday with in-store launches occurring on the same day, the Apple TV is much less of a priority and thus Apple is likely unconcerned about the shipments of the new device coming in a day early. On the contrary, getting some of the Apple TV orders delivered today could be part of the plan to help ease the load on delivery companies for tomorrow's busy iPad launch.

Meanwhile, some of the first Apple TV reviews are in. The Verge calls the $99 device intuitive and “reasonably easy to use,” while The Loop contends the next generation Apple TV is the “epitome of convenience.” Finally, Macworld opines:

At $99, the third-generation Apple TV continues to be as excellent a value as the previous model—and now it supports higher-quality video too. That’s a good thing. For those with the previous generation, however, the decision to upgrade comes down to whether the difference in quality between two high-definition formats is important (and noticeable) enough to you.

Has your new Apple TV arrived? 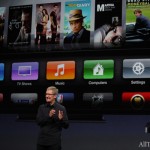 New Apple TVs Arriving One Day Early, As Are First Reviews
Nothing found :(
Try something else